In one of the most disrupting moments to daily life and the operations of the Order of the Arrow, sections across the country have had to make tremendous changes to their annual conclaves. Conclaves are great moments for lodges to get together to share their best practices and engage in fellowship. A number of sections in the Central Region chose to get creative with their conclaves this year and managed to put on some extremely successful virtual events.

The rapidly developing and ever changing nature of this pandemic created difficulties in planning events but our section chiefs rose to the challenge. In Section C-4, which hosts their conclave in early spring, there were hopes that postponing the event by a month would allow them to hold an in-person event at the Summit Bechtel Reserve but ultimately had to create a virtual conclave which they finally held in late September. Some sections like Section C-1B and Section C-3A did not have to change the time of their section conclave and used the months prior to adapt and prepare for a virtual format. Section C-5A and Section C-5B both hosted virtual conclaves just a few short weeks after the shutdowns began. While Section C-1A did push their conclave back, they had plenty of time to make that transition and were able to still put on a fantastic event like the other sections.

Almost every section had to switch their plans when they moved to an online format. The trick was how to make their trainings fun, exciting and informative in order to keep Arrowmen of all ages engaged. There was also the challenge in how to incorporate fellowship into this new time of virtual events. While some had to scrap their plans and start anew, each section brought their own spin to this now decades old tradition of hosting a conclave. Section C-1A, Section C-3A and Section C-3B, chose to spread their conclave out over a longer period of time than just a weekend allowing people to join and attend trainings and events when they wanted.

Section C-1A completely scrapped their original idea and hosted their conclave in an online format. They even went as far as to change their theme from “Urban Invasion”, which was inspired by Area 51, to “Viral Invasion.” For their training, Section C-1A chose to add sessions based on Thrive, satirical training of pandemic survival, and other general life skill lessons. Their pandemic survival training discussed proper health and safety techniques as well as some post-apocalyptic techniques, such as hazmat suits you can buy from Walmart or setting up laser fences to protect your land. Section Chief Ian F.’s favorite moment was learning where and how to purchase a hazmat suit when the air is no longer safe. 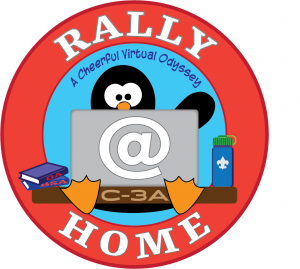 Section C-3A titled their virtual conclave “Rally at Home” spread their conclave out over the whole month of September. Every Wednesday there was a training event hosted at 7pm. The first week of events was hosted by their American Indian Activities committee in which they had regalia presentations and discussions on ceremonies. Then a special presentation by the national chief and vice-chief later in the month. The recordings of these presentations are slated to be on their Section website soon.

Section C-5B titled their virtual conclave “Virtual Tornado Alley Rally” and held both live and pre-recorded sessions during the weekend of their conclave on Facebook, Zoom and Youtube. You can check out these sessions on their Youtube channel here. Their events included a range of training sessions including American Indian Activities and ceremonies, unit visitation, and lodge development. Their lodge focused training included sessions like event communication and promotion and improving event attendance. These sessions were made of short pre-recorded videos followed by live Q&A sessions with the presenters. This allowed Arrowmen to hop on for just a short amount of time for a training session and then come back to ask questions, if they had any.

Section C-4 hosted “Conclave.mp4” made up of two big training blocks with time in between each session for fellowship. All of the presentations and videos of their conclave were recorded and uploaded to a specially designed website that people could then rewatch afterward, similar to the Momentum series. Section C-4 used their training sessions for roundtable discussions on a range of topics, including best practices for virtual events, how to handle different operations during covid, ceremonies and communication techniques.

For Section C-1B,  their conclave was titled “Beach Bash” to get their Arrowmen in a tropical mood while indoors. Section C-1B created videos and live sessions because they really wanted to focus on engaging Arrowmen throughout their section. They held training sessions on the 2020 ceremonies updates and the new Lodgemaster inductions module.

While one of the shorter conclaves hosted this year, Section C-5A packed a lot into their event, entitled “Feeding the Fire.” Special presentations were hosted by National Chief Zach Schoenfeld and National Vice Chief Noah Smith. Their training sessions included lodge breakouts and the effects of COVID-19 on the Order of the Arrow.

Throughout the region, our sections created many innovative solutions to the problems they faced. Section C-3A held events during the weekends, which they called initiatives, that included a fishing tournament and a 5K fun run. Section C-1A had activities that culminated in a nightly talk show during the week of their conclave to talk about events both in the Order of the Arrow itself and their section. The openness of this event and their structure was well received by Arrowmen both within and outside of the section. Section C-4 used game servers and other online games, including a crack the code game to win patches and a bingo game to win a gift card. Open periods between training sessions were perfect times for attendees to play these two games while sharing conversation with each other. Section C-1B also had online game servers that they allowed Arrowmen to utilize for fellowship. Section C-5A’s sessions were broken up by a wide variety of fellowship events, including talent shows, ice breakers, and scavenger hunts.  Although it was short, Section C-5A’s conclave was jam packed with events enjoyed by Arrowmen throughout the section. C-5B’s short sessions were broken up by a range of fellowship activities like kahoot quizzes and other games.

There was a wide variety of ways for Arrowmen to register for their sections virtual conclave. For instance, Section C-4 used a specific website that was developed specifically for the conclave while Sections C-1A and C-5B used separate registration systems to push out links and info to their Arrowmen. C-4 then posted recordings of their training sessions to this website for registered arrowmen to return to later.

Though each of these sections handled things in slightly different ways, they were each able to put on fantastic events attended by Arrowmen across the Central Region. The innovations created by these 7 section chiefs, and all section chiefs across the country, have ensured the presence of their sections to provide support to their lodges during this pandemic.

April Section of the Month: C-4

February Section of the Month: C-1B

July Section of the Month: C-4

The Gischachsummen, part II: Do It Right